Both share the same values, philosophy and passions, each guided by a quest for constant renewal.

Although applied in two different worlds, this quest always leads to the same inescapable conclusion:

Time is an art,
an art that is sublimated with time.

Out of this quest grew the Métiers d’Art “Les Masques” collection, which has drawn on the treasures of Jean-Paul Barbier-Mueller’s private collection and the Métiers d’Art watchmaking tradition that Vacheron Constantin has upheld for over 250 years.

At the time of its presentation in 2007, the project aroused great excitement in the world of Haute Horlogerie. Every year, over a three-year period until 2009, a boxed set of four new masks (each representing one of the four continents of Asia, the Americas, Africa and Oceania) is being produced in a limited series of 25 watches each, for a grand total of 300.

Amazingly lifelike, the first four masks reproduced on the dials of these collectors’ timepieces – from China, Alaska, the Congo and Indonesia – embody an exceptional kind of savoir-faire, combining 21st-century techniques with the rigour of traditional craftsmanship, the only combination that could preserve the authenticity of these masterpieces and portray them so realistically.

In its ongoing pursuit of truth, Vacheron Constantin has surpassed itself with the second boxed set of timepieces, which again contains reproductions of four primitive masks, but this time from Mexico, Japan, Gabon and Papua New Guinea.

Pushing its research and creativity to the very limits, the Geneva-based Manufacture has drawn again on the techniques of the past and taken the technology of engraving to a higher plane, enhancing precision and exactitude in the miniature reproduction of tribal art on timepieces that have become works of art in their own right.

Paying tribute to Man by transcending the limits imposed by time: this is the challenge facing Vacheron Constantin with its Métiers d’Art collection. Such a challenge entails endless questioning and dealing with numerous demands and constraints, but in the end there is a sense of pride in having travelled further towards the impossible. The ultimate reward for any human being.

The art of engraving poetry

To do better, to be even closer to reality. This was the demanding challenge facing Vacheron Constantin after the masks on the first Métiers d’Art “Les Masques” timepieces bore such a remarkable resemblance to the originals from the Barbier-Mueller Museum.

But it is when facing the impossible that the greatest projects are realised. After an in-depth study of the situation, the engraving specialists for Vacheron Constantin decided to focus their attention on subtlety.

Miniaturising a tribal mask can sometimes over-accentuate the power it emanates, thereby distorting its character and identity. Using their expertise, a blend of craftsmanship and modern technologies, the engravers sought to reproduce the poetic sensibility of the masks, concentrating on the softness of the contrasts and the delicacy of the finishing.

The hair of Buddha: each curl is drawn as a tiny spiral in line-engraving

Manual skills are therefore central to Vacheron Constantin’s undertaking; stressing the harmony of form, the engraving work was given a lighter touch.

The complexity of this approach is revealed in the Japan mask, which demanded a level of skill beyond most engraving experts today. First, the mask’s volumes were reproduced three-dimensionally, then transferred to the miniature using the most advanced laser techniques. The next step was to delicately enhance the tiniest details through the art of engraving, as can be seen in the hair of Buddha, each curl of which is drawn as a tiny spiral in line-engraving. The softness of the facial features is brought out by flame-gilding, while the signs of aging on the mask – an irreversible effect of time – have been delicately reproduced by hand so as to capture the essence of the original.

Each mask in turn required special attention and expertise. The Gabon mask, for example, highlights the art of chasing, with each touch delicately struck to give it a smooth finish.

With the Mexico mask, special interest was paid to the surface work: determined to recreate as closely as possible the “pottery” effect – clay being the basic material used in the original mask – the Vacheron Constantin team decided to use matt pumice-stone powders of different granularity. When mixed and smeared on with an ear-swab, they reproduce the rough aspect of pottery more realistically than nature itself!

In the same spirit, the painted wood of the Papua-New-Guinea mask has been replicated on red gold that has undergone a very special chemical treatment to accentuate its colour and has then been hand-patinated to bring out the nuances of the painting. Fluted engraving is also much in evidence, with the circumference of the mask meticulously chiselled with a hand-held graver.

Each mask required around one hundred hours of work and perseverance, coupled with unwavering patience and total dedication. A colossal responsibility, but indispensable if Vacheron Constantin wanted to achieve its mission of conveying an emotion. 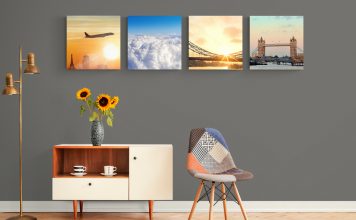 LUXOR WORLD TIME – the first phone in the world with...